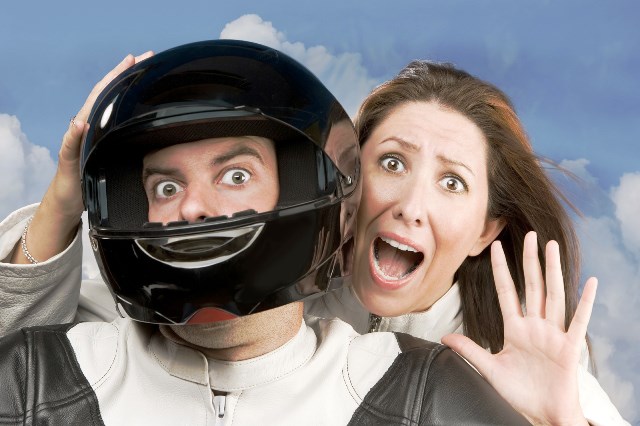 Both beginner and veteran riders are afraid of dropping their motorcycles, that’s a fact. Nonetheless, the reason they are afraid is completely different. Given that the newcomers to motorcycles experiment the unavoidable nervousness regarding anything that happens to their bike, it’s even more likable for them to be extremely worried about dropping the bike, just the same way new car drivers are afraid of getting a scratch on a new car. On the other hand, the veterans are probably more worried about dropping their bike because it is a nicer, more expensive bike than the newbies have when they are starting out. Although both riders share one fear in common: being humiliated. It’s probable that other riders will laugh at you for dropping your motorcycle, but they will be the first ones to help when you have to get back in your feet due to the simple fact that all of them have been there.

2Riding on the highway

The highways are actually much safer than regular roads. The speed is certainly higher, but the flow of traffic is all going towards the same direction, no surprising cards appearing out of the blue from turns and no red lights for anybody to rush. You only really have to take care of the traffic that is around you, following the same direction as you do. The speed limit on regular roads is lower, but they come with more surprises and alternatives.

3Being the slow one in the group

It’s a group ride, not a race. It’s very easy to get caught on adrenaline and the feeling of power that comes with your powerful, fast motorcycle, but it’s just not a good idea. The whole point of riding, in general, is to have a good time, and as long as you are doing so, being the first or the last of a group ride is completely immaterial. It’s not difficult to get into competitive riding when you are on a bike, but that is not what makes motorcycling riding what it actually is, an experience full of freedom welfare when the wind blasting your helmet.

4Riding in the rain

This can definitely be nice. It’s a free wash for the motorcycle, and if you are fearless about driving a card on a rainy day, there is no reason why you should be scared of doing so on a motorcycle. The only thing you have to do is to plan and think carefully the trip. Using appropriate gear and riding safely are examples of good ideas to carry on while riding in the rain. Also, be aware of the fact that the bike is not a car, so water levels are something to take into consideration.

This is the most serious fear of the list, and it is justified. Motorcyclists are completely exposed to their environment and the decisions made by the other drivers or riders around you, so it is normal for the motorcyclists to be extra worried about being involved in a collision. Riding a motorcycle is very similar to driving a car, taking smart decisions and wearing protective gear will reduce the risk factor a lot. Even though protective gear might not be the coolest thing in the world, it actually saves lives, so don’t despise it and wear it.

Torsional Rigidity: Everything You Need to Know!