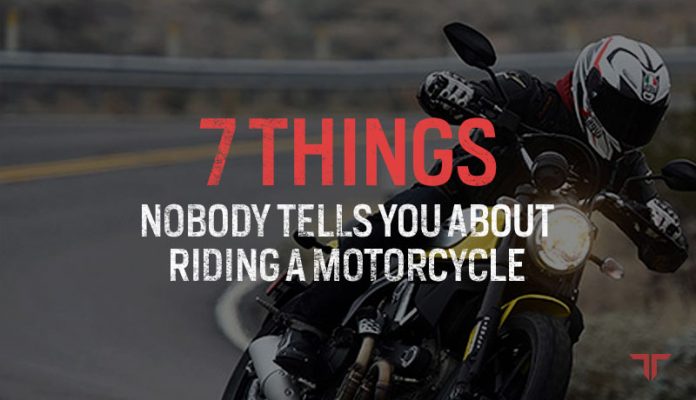 There are many things that no one bothers to tell you before you start riding.

Here’s a few of them

Ask any rider if they have a radar or a better weather app on their phone to track what’s going on in the day.

Bikers wake up, check the weather and it goes something like this.

– That rain cloud is definitely going north I’ll go south and ride those roads instead.

You’ll be tremendously in tune with the natural world.

Between tires, oil, gas, insurance, new gear every season and the occasional breakdown that cheap bike you bought off Craigslist adds cost up really quick.

Before you got your first bike you scoured and searched for a good deal thinking in your head well: All I have to do is drop a couple grand and I’ll be having a blast on a motorcycle.

Riding is deceptively expensive, be prepared to spend thousands of dollars a year on ancillary costs related to riding your bike.

It sucks but it’s the price of happiness.

This is single-handedly the most annoying thing when it comes to riding. You have to plan on whether or not you’ll be out past sunset and then bring a clear visor to swap in once it gets dark or else you’re faced with a choice. You’re either blinded during the day with the one clear visor you brought because of the sun, or you’re blind at night wearing the mirrored riser you brought for the day.

It really isn’t a good option for this. It’s still annoying.

Something many people don’t realize is the sense of speed is closely correlated to how low to the ground you are.

It’s why that go-kart feels like a missile and why a plane feels like it’s barely moving.

Reference points matter on a sports bike. Your head is about as high as a soccer mom in an SUV which is why you never realize you’re doing 65 and a 40… Or why 35 miles per hour feels so slow.

One of my fondest memories that I have riding was on the second day that I had my motorcycle and I got the biker wave from a guy across the street on an R6.

At that moment I instantly felt like I was a part of a family, a brotherhood.

There’s an incredible amount of solidarity among bikers and of course, I felt super cool.

In case you don’t know the biker wave is this little salute that bikers get to each other when you pass one another on the road. It’s a small gesture that says…

The biker wave is a small reminder that we’re all total nutcases on the amazing machines that we love.

Being very comfortable with your mortality.

Nearly dying is a pretty common occurrence with motorcyclists.

Maybe you caught a nasty tank slapper on your favorite road…

It’s a feeling all bikers are familiar with.

Those who don’t ride will be shocked to hear that almost dying is a common theme. And maybe that’s why we’re so addicted to riding motorcycles.

Wanting more than one bike.

For reasons that scientists still cannot explain you will never be satisfied with only one motorcycle.

Even if it’s a fantastic and awesome bike you will always want another bike that can do other things.

Oh, a dirt bike? Well, a track bike would be sweet.

The venerable n plus one rule is in full swing.

To be honest though.

I think every rider needs a GROM or a pit bike in their lives. Maybe I should check Craigslist or call up my local Honda dealer.

How to Ride Safely When It Is Raining or Icy