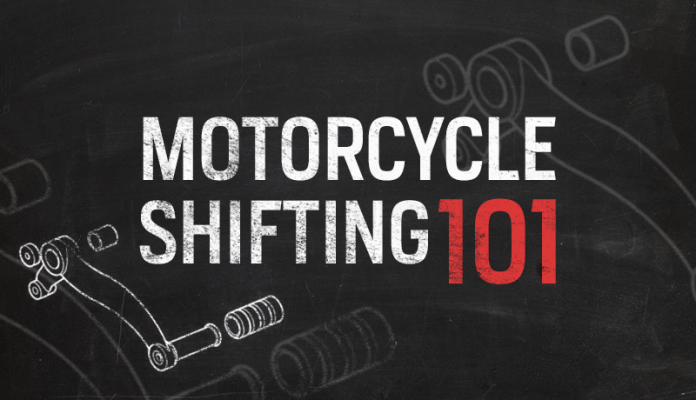 Shifting a motorcycle is one of the challenges a rider gets when learning to ride a motorcycle.

Don’t be scared – shifting a motorcycle can be mastered with practice – and it really simpler than it sounds.

There are three basic controls to operate when shifting a motorcycle – the throttle, the clutch and the gear selector.

The throttle revs the engine, the clutch engages and disengages the transmission.

The gear selector, selects the gear.

The motorcycle gear pattern is selected by clicking a lever with your left foot, and is typically laid out as follows:

There’s also the GP Shifting pattern, which is the reverse order – 65432N1. It’s commonly used on track races because it helps changing gears during corners.

The proper shifting technique requires the following manoeuvres to be performed smoothly and deliberately:

The mechanics to move a motorcycle is as easy of these 6 steps, however to do it smoothly requires a lot of practice. Know your motorcycle controls inside and out to have an idea of how they work.

Practice riding on an open place without transit. For example, a parking lot. And, the most important, be safe and aware during the learning process.

You will probably find that ride a motorcycle is easier than it sounds. Once you get the clutch feeling, gear matching and how much throttle is necessary to have a smoothly acceleration, the process will be much easier and it will require less focus.

After a lot of practice and riding you’ll feel that gear shifting will start to be an automatic reaction.

Although this movement is quite simple and repetitive in riding, it is common to see a motorcyclist “scratching gear”. If you are from the “scratchers” team, it is a good idea to correct the compass, as this failure can cause damage.

It’s easy to tell the experience level of a rider just watching how he shifts. That’s because shifting is required so often in riding.

Shifting efficiently is important because during the time between shifts, the rider is especially vulnerable.

What you need to want is that the shift needs to be done at the point where it will enter the next gear at an rpm equal to the engine’s torque peak.

The below techniques are not recommended for beginners and should be practiced with caution.

Quick, efficient upshifts are pretty easy to master once you take the time to practice the technique.

Your primary goal is to reduce the amount of time that you are not accelerating. This can be done with a clutchless upshifting.

To do that, race bikes uses quick-shifters to change gears without having to close the throttle. Nowadays some stock street bikes already come with a quick-shifter.

Quick-shifters work by having a sensor detect movement in the shift linkae from the rider’s foot and then cut the ignition for about 40 milliseconds. This unloads the transmission and allows it to easily shift into the next higher gear.

The good news is that you can add a quick-shifter for you motorcycle. However it’s kind of expensive.

What if I tell you you can accomplish almost the same result by mimicking the “cutting-power” with the throttle?

The first step in clutchless upshifting is making sure the engine is under full load. This means full throttle and super-high rpm.

The second is preloading the shift lever by pulling your foot up with just slightly less force than that needed to engage the next gear.

Next, quickly roll off the throttle approximately 10-20 percent of its twisting range and get back to throttle. The wrist movement here should be as small and as fast as possible, not unlike blinking an eye.

Lastly, when this happens, the torque force on the transmission will temporarily unload, and the preloaded shift lever will now snick into the next gear.

To finish up, for full-throttle “speed shifting” no clutch is necessary.

Most riders are amazed the first time they find that they don’t need to use the clutch in high-performance shifting.

Remember, this assumes a full engine load. At small throttle openings, there is no need for fast upshifts so you should shift as normal (with the clutch).

The high-performance downshifting is significantly more difficult than upshifting and requires more practice time to get the feel for it.

To briefly explain, the most important aspect of downshifting is to match the engine speed with the wheel speed.

If the engine speed is too low, the rear wheel will start hopping as it struggles to regain traction, which could result in a nasty crash.

This is the first problem beginner riders will face when they start to go fast.

Downshifting by just pulling in the clutch, downshifting the transmission, and letting out the clutch causes the engine to have to catch up the speed of the rear wheel.

This resistance causes the tire to break traction, puts undue wear on the clutch, and makes the motorcycle jerk as the clutch is let out.

This usually happens when you are at high speed and downshift more than 1 gear really fast.

If you are not planning to do a motorcycle slide, try to avoid this situation.

A slipper clutch is designed to have the clutch plates freewheel until the engine speed catches up with wheel speed.

The correct technique for downshifting involves or blipping, the throttle about 30 percent of its twisting travel at the instant the clutch is disengaged by pulling in on the lever.

Once the clutch is disengaged, the blip will quickly increase the engine rpm – most known as “rev match”.

At this point you should quickly engage the lower gear.

When the clutch is re-engaged by letting the lever back out, the new lower gear ratio will require the higher rpm to smoothly blend engine speed to the new rear-wheel speed.

Although it’s possible to over-blip the throttle in this situation, it’s highly unlikely and has a little negative effect on the bike.

Newer motorcycles are coming with a called “auto-blipper”. It does the same job as quick-shifter but instead of being clutch-less on upshifting, it is on downshifting.

When beginning to learn this technique, you’re far better of erring on the side of too much rpm than not enough.

Don’t worry if it sounds overwhelming. Just take plenty of time to practice this statically before trying it at speed.

1. When I Should Shift Gears?

There’s a no real answer for optimum shift point. Revving high is not required for most road riding conditions.

Typically, the best spot of the engine’s power band is the point at which most engines to be shifted. That’s because the engine the most effective power at considerably different RPMS.

Finding neutral can be difficult for new riders. However, with a bit of patience and a gentle touch makes the task easier. If you’re not pulling the clutch all the way, it might be harder to get into neutral.

3. How to Shift Smoothly?

The most effective way is to pay attention to your motorcycle behavior: if your motorcycle jerks while you’re letting out the clutch, you are probably to abrupt with your left hand.

If you’re lurching ahead during shifts, you might be applying too much throttle.

And if your motorcycle slows down during shifts, you might not be revving the engine enough between gear changes.

You always need to downshift as you slow down.

Doing so will not only allow to use the engine braking to help reduce speed, it will enable you to have more torque and accelerate again if a stop is not necessary.

5. Can I install a Quick-Shifter?

Definitely, quick-shifters aren’t for small bikes though. Look out for a quick-shifter that matches your motorcycle model and get it installed on a mechanic.

If you want to rev higher but skip a gear, no problem. However your motorcycle torque will be lower.

This may not be the smoothest way to ride, but it can save gas some times if it’s done efficiently.

7. Can I Park my Motorcycle on Neutral?

It is possible to leave it parked in neutral on level ground, but if you’re parking at an inclined surface, leave it in 1st gear to keep it from rolling off its side stand.

7 Beginner Riders You Probably Will Meet

7 Beginner Riders You Probably Will Meet